Colonial Williamsburg Virginia is a place where families and history buffs can co-exist like nowhere else in the country. Located halfway between Norfolk and Richmond lies a little known area of early American history. Williamsburg is situated at the heart of several towns important to the founding of our great nation. Yorktown is just a short drive north, this is where an important battle between British and American troops took place over 200 years ago. Just a short drive south is Jamestown, which is well known as the first European American settlement in the new world. Williamsburg itself is important as many of the founding fathers lived in the area around the time of the revolution and many of the building that they frequented are still standing. In fact much of Williamsburg’s historic district is just like it was in 1776. For families you cannot go wrong because just 2 minutes east is Busch Gardens with all its roller coaters and amusement park rides. Once there you can also tour the brewery and sample different beers.

We start our journey by stopping by the Colonial Williamsburg visitor center where you can purchase tickets that allow access to the many buildings in and around the town. Here you can find out about the history of Williamsburg and how this sleepy 20th century town was transformed into an American history mecca with the financial help of John D Rockefeller. Here you can also look into getting tickets for the various tours offered throughout the historic areas given by colonial era clad crew members that will make you feel like you are living in the 1700’s. The visitor center also has a nice gift shop, and you can also rent period clothing that will make your trip to 1776 complete. Once you leave the visitor center you can either use the shuttle to get to the more than 300 acre historic district. There are no cars allowed inside the historic district, however, you can drive, park just outside  and walk in. The surrounding areas are flourishing with little shops, restaurants, and other business’s that add to the ambiance and let you know you are in a special place. Across the street from Colonial Williamsburg sits the second oldest college in the United States, the College of William and Mary.

Once you begin walking around the historic district, you will quickly realize how special a place this truly is. You will see that Colonial Williamsburg is a fully functional 17th century town. Everyone associated with the town is wearing period clothing and talking just like they would 200 years ago. Everything about the town is made to make you feel like you just stepped off a time machine. One of the first places I would recommend visiting is the Governors Mansion. Take the tour and see the ornate decorations inside as you imagine life living with a 17th century family. The town has fully functional facilities such as a blacksmith where they turn out about 10 guns a year made to 1776 specs. There is a woodworking mill where they turn out furniture just like the colonists had. They even have brick makers that turn out real bricks in outside kilns that are then used for new construction and repairs in and around the historic district. You will find a town print shop that painstakingly turns out a daily newsletter to exacting standards just the way it would have been done in 1776 They make their own paper, press print the newsletters and hang them up to dry. There is a courthouse where you can witness a real life 17th century trial and learn about 17th century law and order. Various times throughout the day you can witness revolutionary war re-enactments with live cannon fire and charge lines. There are even real fife and drummer marching bands playing patriotic songs as they pass by. 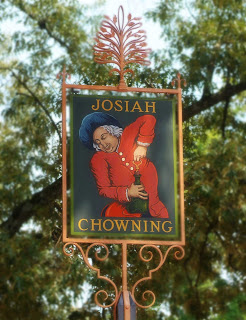 When you are hungry there are several taverns with names like Chowning’s, Shields, Kings Arms, and Christiana Campbell’s. Some of these have the distinction of serving great historic figures such as Benjamin Franklin, Thomas Jefferson, and George Washington. You may walk around the historic district without purchasing a pass, but you will be glad you have one as you will have unfettered access to all of the buildings in the historic area and see how each was used in support of the town’s people. You can spend 2 weeks here and not experience all that is offered, as there are multiple tours and events going on throughout the day and evening. I would highly recommend you take time and go on at least 2 or 3 of these to get the feel of what life was like for the colonists.

A short drive down the Colonial Parkway is historic Jamestown Settlement, known with distinction as being the first European American settlement in the new world. There you can tour replica ships and get an idea of the type of vessels the colonists voyaged across the Atlantic in. There is also an early american fort here that you can tour and see an early American archeological site where to this day they are still uncovering secrets of our past.

A short drive up the Colonial Parkway is Yorktown. This is where the Revolutionary war came to an end as American forces led by General George Washington and French forces led by Comte de Rochambeau defeated the British army and navy led by General Charles Cornwallis. This final defeat prompted the British Government to negotiate a surrender thus giving way to the birth of a nation, The United States of America. At Yorktown today much of the bunkers and fortifications are still in place and you can tour these grounds and see the sentries used to defend the shores from the onslaught of the British forces. They have several out buildings and offer guided tours re-enactments.

Once you get the kids all caught up on American history you can take a break from it all at the world famous Busch Gardens theme park located just 4 miles from the historic district. Here you can ride extreme roller coaters and sample food from all over the world. The park is broken up into lands or countries and each land has a signature restaurant, for instance in the Germany area there is a German hofbrau haus where you can eat sausage and cheeses, In Italy they have you guessed it, an Italian restaurant. In France there is an outdoor BBQ and so on. I don’t know if its Busch’s culinary roots that go with beer making, but I will have to say Busch Gardens has the best food I have ever eaten at an amusement park. The kids will have a blast on the rides and the parents will like the food and the displays like the Clydesdale horses and the different animal exhibits inside the park.

There is much offered by a trip to Colonial Williamsburg, My family and I have been there twice and I can say we have not seen it all and we would not mind returning again. I can also recommend when to go. We went once in the spring and the summer. The spring can bring rain but the weather is mostly agreeable. As far as the summer, and especially August, it is hot and humid. You will be sweating within 20 feet of your hotel room,so I would not recommend summer. I would say April/May when the flowers are blooming or September/October for the Fall colors will be the two best times of the year to visit Colonial Williamsburg. As far as where to stay, there are many options here, however, the last time we visited we were a block away from the historic district, which we liked that much better. We were able to walk everywhere and didn’t have to worry so much about parking or taking the shuttle. The rates are a little more expensive but I think its worth it and gives you a better colonial experience. Here is a link to some of the official Colonial Williamsburg hotels or for other hotels in the area, visit Trip Advisor.

As for where to eat in Williamsburg, visit the following link to several restaurants in the Williamsburg area. We really enjoyed all of the taverns in the historic district. Other restaurants we really liked that were close by were Trellis which is famous for it’s trademarked Death by Chocolate dessert. and Seasons Restaurant and Tavern, which serves up american cuisine in a uniquely decorated cafe style american dining room.

I hope you enjoyed this post and will be able to visit Colonial Williamsburg one day and experience all there is to see in this unique part of the country. To see more pictures I have taken please visit my galleries. Please share this post with your friends and family. As always thank you for your support.