7/6/2012 Day 1 – Long drive from home to Ridgecrest. Very uneventful, we left too late to go to Randsburg and take some pics of their old mining town. But on the bright side we made it here in one piece and so far we haven’t noticed if anybody forgot anything. 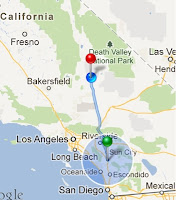 7/7/2012 Day 2 – Drove to Lone Pine and stopped at the Film History Museum, then headed to the Alabama Hills to take pictures of arches and let the boys go rock climbing. Then we drove up to Mt. Whitney Portal to see the waterfalls. After lunch in Lone Pine we headed north intending to go the the Ancient Bristlecone Pine forest in the White Mountains but a brush fire along Hwy 395 caused a complete road closure. We didn’t make it into Bishop until 7pm. We might try for the Ancient forest on the way back. Dinner at Amigos Mexican Restaurant was very good.

7/8/2012 Day 3 – Left the room at 8:30am and went across the street to a family favorite, Schat’s Bakery for some Oliebollens and a coffee. Then we headed over to June Lake for some swimming and fishing, Justin didn’t catch anything and the water was cold but we all had fun. We plan on coming back here to do some camping, they have a nice campground and it wasn’t crowded.

Afterward we went to our favorite restaurant, Whoa Nellie Deli, located inside a Mobil gas station at the intersection of hwy. 395 and Tioga Road in the town of Lee Vining. They have 5 star food and if you sit outside there are great views of Mono Lake to the east and the back side of Yosemite to the west.

After lunch we drove up to the historic town of Bodie, which is a real turn of the century gold mining town. Then we drove to Carson City, NV for the night. Tomorrow, Virginia City and Lake Tahoe await.
7/9/2012 Day 4 – Short drive to Virginia City in the morning. As we walked through the historic streets we could hear the steam train’s whistle as it takes people on a tour through the largest gold and silver mining area in Nevada. Visited the Comstock Fireman’s Museum and talked to the curator who gave us a unique overview on the history of the town.

After looking around at all the shops we headed to the V&T Railroad to take our own train ride aboard an authentic steam locomotive. It was great! The sounds and smells of the steam engine chugging’ along were a thrill. Afterwards we headed up into the cool air of Lake Tahoe, checked in to our room and headed down to Nevada Beach for a swim.

7/10/2012 Day 5 – I got up early (4am) to catch magic hour and to take pictures by Lake Tahoe. Walking over rocks to get closer to shore I tripped and smashed my new Tokina 16-28 2.8 lens and the battery pack on my Nikon D700, luckily the camera made it through with nothing more than a boat load of sensor dust. I was able to go to my back up lens and get some good shots even though I was bleeding from multiple locations. Heck! I didn’t get up at 4am to not get any shots, LOL!!!

Later that morning we set up shop in beautiful Zephyr Cove. Activities included swimming, tubing, paddle boarding, and diving from the rocks. Lisa and I got sun burned pretty bad. That and being banged up from earlier and we’re in sorry shape, but we will press on. Tomorrow Yosemite.

7/11/2012 Day 6 – Left Lake Tahoe in the morning for Yosemite. Headed south on 395 and had another great lunch at Whoa Nellie Deli followed by a scenic drive up Tioga Road. Checked in at the Yosemite Lodge where the temperature was 95 degrees. NOTE: Yosemite Lodge rooms have no A/C. Justin and I walked down to the Merced River to cool off. The water levels in the park were as expected, low given the record lack of rainfall this year. However, thunderstorms are starting to roll in that may help that. That said there is more water flowing from my back yard fountain than from Yosemite or Bridalveil Falls.

7/11/2012 Day 7 – We cancelled our rafting trip due to the low water levels in the river and headed to Lundy Lake to go fishing. After that we headed to Bishop to check in before heading to the Ancient Bristlecone Pine Forest. Then we went to Amigo’s again for dinner. We head home tomorrow.

7/12/2012 Day 8 – Started the day in Bishop by going to Schat’s Bakery for last minute pastries then started for home. On our way home between the cities of Lone Pine and Independence we stopped at Manzanar National Historic Site where they have nice museum showing conditions Japanese American citizens faced during WWII. There is also a driving tour of the camp outside. May I also say they have the cleanest restrooms on 395.

An hour later we made a stop in the little known 1895 mining town of Randsburg. There is a collection of well preserved historic buildings from the gold mining days of the late 1800’s. This would be the last stop on our trip, I hope you found this information useful for planning you own trip. If so leave a comment and  as always, thanks for reading. -John Ward

To see more of my photos visit my galleries