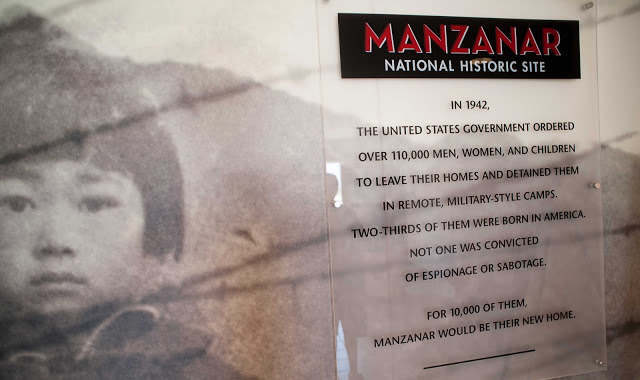 Located on Highway 395 between Independence and Lone Pine lays a sleepy memorial to the internment of Japanese American citizens during World War II. I’m talking about Manzanar War Relocation Camp. Manzanar has a sign denoting it as a national historic site but looking at its single unassuming structure from the highway doesn’t do it justice. One must go inside to see the whole story of what really happened to the Japanese American Citizens during the war. How the government detained 110,000 people in remote camps, with Manzanar being the fifth largest of these camps holding around 10,000 prisoners.

When you pull into Manzanar there are two ways you can go. You can park and go into the museum or you can go on the auto tour. Both are free and they collect no fees. We chose to drive the auto tour first and afterwords tour the museum. It takes 15 minutes to complete the auto tour and gives you a good idea of the enormity of the camp.

When we walked into the museum we really didn’t know what to expect but we were quite surprised by the amenities. There was a large gift shop with staff on hand to answer questions. Inside is a theater where you can watch a really good 22 minute film on the history of Japanese internment. There are also numerous exhibits telling the story of life behind barbed wire for Japanese American citizens. The museum is very clean and air conditioned. Oh, and did I mention the restrooms are the nicest we encountered on the entire 395 route from Ridgecrest to Lee Vining.

All in all our side trip to Manzanar which we thought would last around 10 minutes ended up being around two hours. And we really didn’t see all the exhibits. Knowing what we know now, we will definitely go back to Manzanar in the future.